We Buy Handel Lamps From Sellers Across The Country

The Handel Company produced a lovely line of vases and jars early in the company’s history.  All Handel vases are rare, but only a handful are worth more than $1,000.  The vases are typically broken down into three types.

The most common Handel vases are acid etched.  They have clear and yellow glass.  We have examples of seven of the vases in our vase image gallery.  All the vases are marked with a Handel signature and a number.  The number represents that specific design type.  It doesn’t have anything to do with the number made or the value.

The middle of the line vases are known as Teroma.  Handel Teroma vases typically sell for between $500 and $2,000, depending on the size and appearance of the vase.  These were first made in 1906, but they didn’t become especially popular until around 1915.  Unlike the later version of Teroma vases, these are not acid etched.  Instead they were ice chipped then painted with enamel on their exterior.  Almost all of these scenes relate to nature.  A couple of the vases and jars were inspirations for later Handel reverse painted lamp shades.  Teroma vases are also marked.  They usually have a number, and some were signed by the artist at the factory who painted the vase.

The most expensive Handel vases are also their earliest.  The ones I have seen are all about fourteen or fifteen inches tall.  The vase has the dark chipped ice design with a large enameled scene.  The central design is always a real showpiece done by the artist.  The vases are worth around $4,000 today.  Very few exist.  These are marked as Handel Ware on the base. 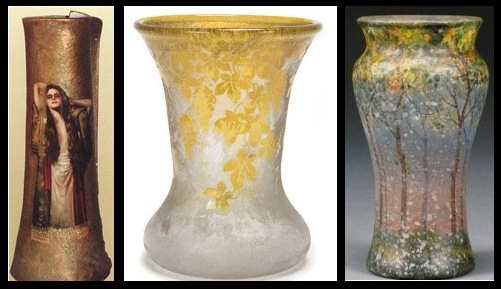